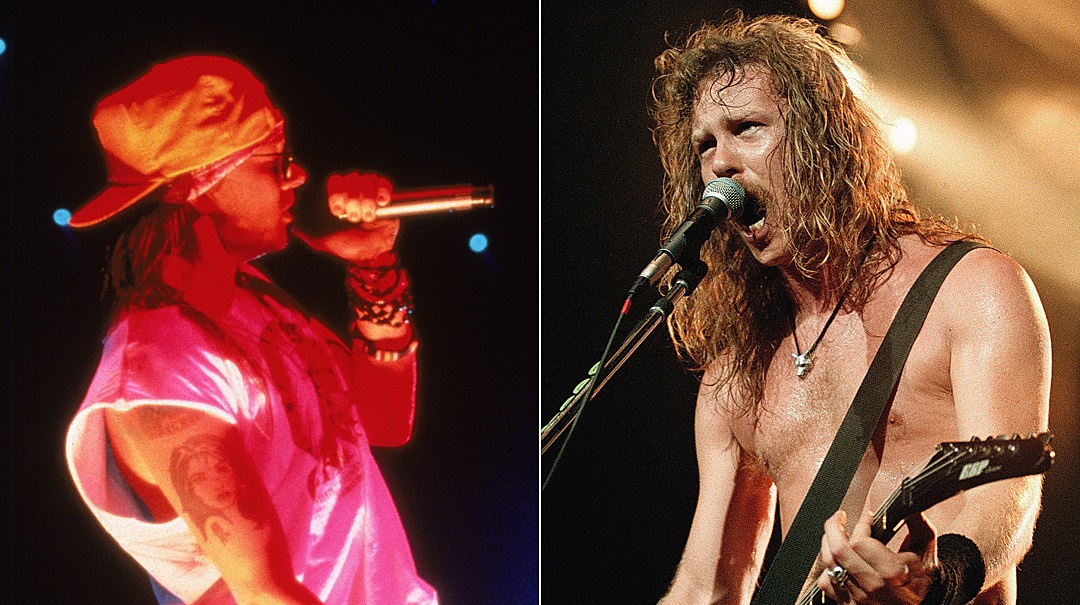 It seemed Kurt Cobain knew something everyone else wasn’t aware of when he turned down the offer to have Nirvanaopen for Metallica and Guns N’ Roses on a tour which launched July 17, 1992, at RFK Stadium in Washington, D.C. Faith No More, who were familiar with their Bay area comrades Metallica, promptly took the opening slot and later wished they hadn’t. The road was paved with bumps and less than a month into the tour one of the most infamous riots in metal history transpired, causing $400,000 worth of damage.

Maybe the GN’R and Metallica tour was doomed from the start. Metallica were using more pyro onstage than a Fourth of July fireworks display, and Guns N’ Roses were perfectly happy taking two hours to get their stage set up after Metallica finished their set. Yet, at the time, both groups felt like they could do no wrong. Metallica’s Black Album was still burning up the charts (it would eventually sell over 16 million copies) and Guns N’ Roses were touring behind their two albums released simultaneously, Use Your Illusion I and II, which sold a combined 14 million copies. By the end of the tour, however, both bands would learn that too much excess on any level is a recipe for disaster.

The Guns/Metallica tour was announced in a press conference at the Gaslight in Los Angeles on May 12, 1992. Tickets quickly sold out and opening night was a huge success, despite problems with the sound system, which plagued many shows in the run. A film crew shot Metallica’s set and their performance of “Creeping Death,” which was used in the 1992 documentary A Year and a Half in the Life of Metallica, in which James Hetfield pokes fun of Guns N’ Roses’ rider amongst other things.

To say there was a mutual lack of respect of one another’s artistic aesthetics is an understatement. And Metallica had good reason to be contemptuous of GN’R. During a performance on July 21 at the Silverdome in Pontiac, Michigan, Axl Rose vomited during “You Could Be Mine” and walked offstage. He returned and apologized to the crowd, and the band replayed the song. A little over a week later everything started to fall apart.

On July 29, during the band’s second show at Giants Stadium in East Rutherford, New Jersey, Rose, suffering from severe throat pain, walked offstage near the end of the set during a cover of Bob Dylan’s “Knockin’ on Heaven’s Door.” Bassist Duff McKagan finished the song on vocals. The next day Rose was diagnosed with vocal cord damage. Doctors suggested he take at least a week off and GN’R rescheduled three shows. The situation went from tense to explosive.

On Aug. 8 at Olympic Stadium in Montreal, Metallica frontman James Hetfield lost his bearings half way through the show and during “Fade to Black,” he was standing on top of a pyro grate when it went off. Hetfield’s arm was blasted by a fountain of flames and he suffered second and third degree burns. Metallica immediately stopped the show and Hetfield sought medical attention.

Guns N’ Roses had an opportunity to be the heroes of the day, but the normally two-hour break between sets took three hours that evening. When Guns N’ Roses finally took the stage there were sound problems and Rose, citing a sore throat, left early. A riot ensued as furious crowd members streamed into the streets and set fires, flipped over cars, smashed windows and looted stores. Police eventually restored order but the damage was extensive. Metallica later implied that Guns N’ Roses fueled the fire and Guns guitarist Slash later wrote in his book Slash, “It was actually a huge issue for me because I’d lost face with everyone in Metallica.”

Metallica postponed six shows due to Hetfield’s injury and canceled an Aug. 17 gig at the British Columbia Place Stadium in Vancouver. When the band was again able to play, on Aug. 25 at the Phoenix International Raceway in Avondale, Ariz., Hetfield was in a heavy arm bandage that made it impossible to play guitar, so Metal Church’s John Marshall, who had been teching for Metallica, played rhythm guitar for the rest of the tour while Hetfield sang.

Faith No More wanted off the tour for a while, and vocalist Mike Patton reportedly had planned to defecate on Rose’s video monitor, but before he got the chance Guns booted the band on Sept. 21 due to undisclosed disagreements. They recruited Ice-T’s thrash metal band Body Count to open all remaining dates but the Sept. 27 concert at the Los Angeles Coliseum. The mighty Motörhead opened for the last three nights, including the Los Angeles performance.

Following the final gig, McKagan’s family and friends staged an intervention and the bassist was whisked off into rehab. Even with lost income from canceled shows, Metallica made lots of money from the stadium tour. The same can’t be said for Guns, who hobbled home with 20 percent of what they expected to earn, claimed Slash in his memoir. In addition to being fined heavily every time they took the stage late, Rose blew lots of dough on extravagant backstage parties, each featuring different themes, including Casino Night, the Roman Bath Party and Axl’s Mexican Fiesta.